Once again the target was to leave as early as possible due to uncertainty over road conditions as we have received mixed reviews from fellow travellers. But based on our experience we were not thinking about the information received and focused on our plan. Since we had already spent time at high altitude everyone was acclimatized to high altitude that added to our comfort for further journey. We packed our bags and fully loaded the car for the return journey. It almost took an hour to place everything in order and by the time we left from Leh it was 12:05 p.m. with trip meter at 3370 KM. We filled the fuel tank at the last fuel station after Leh i.e. at Karu (33 KM ahead) and took a halt for lunch. We left from Karu @ 1:55 p.m. and crossed Upshi @ 2:10 p.m. the last major settlement after Leh thereby crossing 46 KM. The weather as well as road conditions were perfect. We were cruising on the tarmac with beautiful view all around. Once again a change in the topography with quite a few stretches of plain. The vast expanses of plains at such an altitude flanked by mountains were a treat to watch.

The road ahead was also beautiful and we were cruising at a descent speed even on the hills. After a gradual descend we were again cruising through the plains with panoramic view of Himalayas. The vast expanse of plains with green cover and rocky mountains were an overwhelming sight. We took a small halt and spent some memorable time in the lap of nature. While cruising on the highway there came the time when we could see the end of luxury driving and the glimpse of tough terrains ahead. At this juncture there was another mystery that unfolded â€“ a sight that was the highlight of the day. At the end of the plains we saw formations of natural rock and sand along Sumkhel Lungpa River. Nature at its best! We continued our onward journey and the comfort cruise was past with rough road conditions ahead. We reached Pang (altitude 4600 m) @ 6:25 p.m. thereby covering 172 KM.

There were some small tea stalls and tenting options available at Pang. By looking at the tough terrains and uninhabited location we initially gave a thought on taking an overnight halt here but finally decided to move ahead. We reached Lachung La (altitude 5065 m) @ 7:25 p.m. with 194 KM covered. We covered the uphill climb of 22 KM from Pang to Lachung La in an hour. Lachung La is the second highest pass on Leh â€“ Manali highway. We moved ahead and reached Nakee La (altitude 4739 m) at 8:10 p.m. thereby covering a distance of 205 KM. By the time we crossed Nakee La it was dark and we still had some distance to cover to reach Sarchu. The road conditions were a mix of good as well as tough conditions.

After Nakee La we started traversing through hairpin bends and these loop seemed never ending. Since it was dark we were caught unaware of these loops and came to know about the Gata Loops (21 hairpin bends) which covers a descent of 500 m in altitude after the last bend. We took a sigh of relief after crossing Gata Loops and the road ahead was decent with patches of tough terrains. We finally reached Sarchu @ 9:55 p.m. thereby covering a distance of 246 KM. There was only one tent site and few makeshift settlements for overnight stay at Sarchu. We finally opted for the makeshift settlement as it seemed to be the only option available. In the morning when we moved ahead than realised that lot of stay options were available in other side of border just after the checkpost. For all travellers, Sarchu (J&K) and Sarchu (HP) are separate with Sarchu (HP) being more beautiful and lot of campsites available for stay. 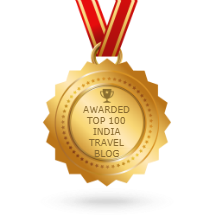